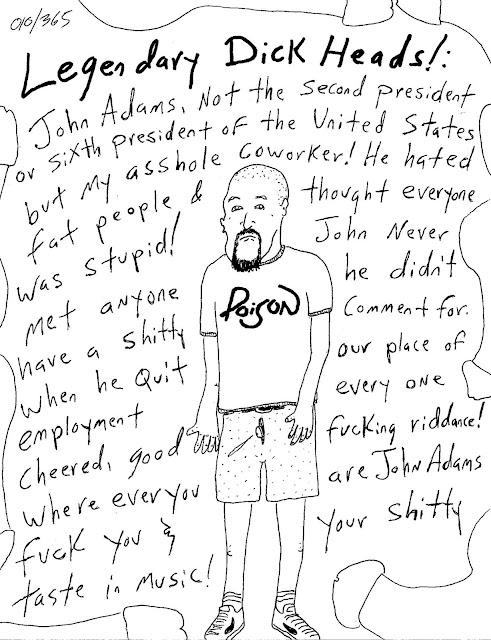 Legendary Dick Heads! John Adams, not the second president or the sixth president of the United States, but my asshole (former) coworker! He hated fat people and thought everyone was stupid! John never met anyone he didn't have a shitty comment for. When he quit our place of employment everyone cheered, good fucking riddance! Where ever you are John Adams, "fuck you!" & your shitty taste in music.

Over the years I have worked with several assholes like John Adams, they are fucking miserable so they come to work and make their coworkers life's as miserable as theirs. People like this should either get help, work by themselves, masturbate, smoke some weed, or possibly consider shooting themselves. Look, John Adams & assholes just like him, you don't have to come to work and "walk on egg shells" or be everyone's friend, but just refrain from being a toxic fuck... this applies to students as well... all you mother fuckers are such chicken shits, if you get caught you claim to be joking, you hide behind the fact that no one wants to be a narc, and if we rightfully knock your dick into the dirt we will be the ones that get punished.

It's funny, I haven't worked with John Adams for years, but after all this time I have nothing but hate for this mother fucker. At the time I was stressed out about looming layoffs and had a family to support and the last thing I needed was a fucking coward tormenting me at work. It's funny, just
knowing that this wimp couldn't stand a chance in a fist fight with me just makes the thoughts of this fucker even more infuriating.
at May 06, 2017