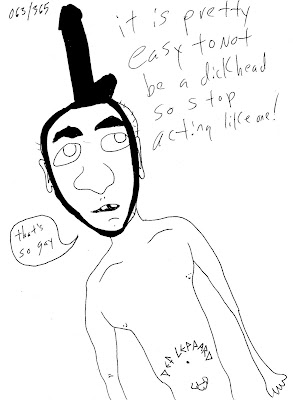 Recently I was talking to a coworker about some movie he saw, in one sentence he managed to use the word “gay” around 5 times to describe the movie, usually I let shit slide because I don’t want to spend my whole time warring with people that use “shitty” language.

I politely said to my coworker, “I have to stop you, I have a daughter that is gay, & I would like for you to stop using “gay” as an insult when you are around me”
He seemed to get offended and told me, “I wasn’t talking about the people, when I say gay I mean stupid, silly, retarded, & dumb”

I explained to him that I know his intention wasn’t to be homophobic, which is why I spared him the lecture, but I assured him that his comments were very much homophobic.
He shot back to me, “I don’t know why you are offended in the 70’s and 80’s it was wrong to be gay, but now a days it’s accepted”

I wasn’t quite sure the point he was trying to make, I said to him, “it was never wrong to be gay, & people that think so are assholes, but my point wasn’t to argue this, I didn’t even want to be mad at you, I just wanted you to stop using “gay”, as an insult when you are around me.
He asked me why I am acting offended, I told him, “Because I am!”

I then told him I can’t talk to him anymore and I walked away… I didn’t want to argue with my coworker, I didn’t want to be mad at him, I just wanted him to stop, which he wasn’t able to do. All I wanted for him was to just agree to my request and just try to be more mindful in the future, which I guess is too much to ask.

Yesterday the previously mentioned coworker sent me a text that read, “Hay Karl, sorry you took offense to my comment at work.” Fuck this guy! He will never fucking get it…