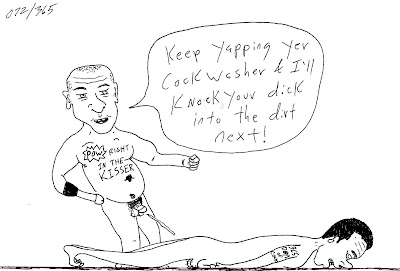 Today I had a customer I wanted to punch in the face… his machine was broken and I get that he was frustrated, but the way he talked to me was so out of line. I consider myself a nice guy, and I was nothing but sympathetic to him & his issue, but on his path of being a dick he changed course and became a major asshole, I’ll spare you the whole story and leave it at his parting words, “I make a lot of money, more money than you… people like you are a waste of my time, I make so much money I don’t care about people like you!” Now, I don’t know why I let this guy get under my skin but I did.

I'll probably be at the Skate or Dive show with McRad tomorrow night, see you there!
at July 07, 2017