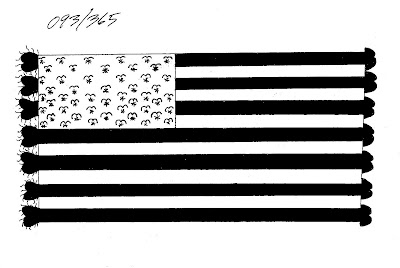 Here is a rough draft of the new and improved American Flag, instead of stars there is 50 buttholes representing 50 states full of assholes! The stripes represent every dick that voted for Donald Trump (or Hillary Clinton) ...I voted for neither!

If I spent more time on this I probably could have lined up the buttholes better, but at this point fuck that... I am over this shit and onto the next thing, which is a handful of sleeping pills & the Sam Harris podcast

Well, I hope to see you tomorrow night at the Echo and the Bunnymen gig, should be a lot of fun, or maybe I'll see you before the gig at CraftHaus.
at July 28, 2017