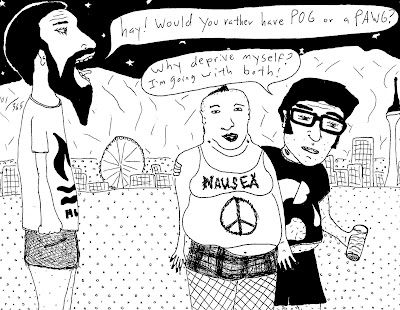 A- "Why deprive myself, I'm going with both!

Recently I was asked by one of my associates if I was into P.A.W.G., I wasn't too sure what I was being asked, in my mind I imagined those circle things kids liked in the 90's and the juice that consists of passion fruit, orange, and guava, but I knew this sick fuck didn't give a shit about those things. I don't know why, but whenever someone I know discovers a new fucked up terminology they don't just share it with me, they usually ask if I'm into it, for example, "hay, Karl! do you like to chocolate bandit mask?" or, "Hay Karl! Are you into cock docking?"if you are curious, "yes and yes!"

Since I didn't know what a P.A.W.G. was I said, "yes!" because I assumed it would give the person a chance to laugh at me... The person did laugh and said, "damn, I knew you were into Phat Ass White Girls!" being a bit of a leftist douche bag I tried to not laugh, but I did... I told my associate that not only was I down with P.A.W.G., but I was down with P.A.B.G. , P.A.M.G. and whatever letter combo... I was informed that a P.A.B.G. is not called that, but I don't remember what he said, then he informed me that a P.A.M.G. is a B.M.W. (Big Mexican Woman) I shrugged my shoulders and said that it didn't matter, if they liked punk and were funny, I would take them to Chili's on a date. I then said I was down with P.A.W.M., P.A.B.M., & P.A.M.M., at this point I was informed that I was gay and that no one wanted to talk to me.

I hope they never make a beer bottle that looks like this because I will start drinking beer through my asshole!
at August 05, 2017