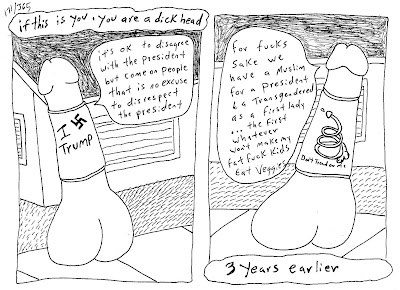 This is one could have been better, but I don't think it was very well thought out... to be honest with you none of my shit is well thought out... Oh, well in my defense I was super fucking wasted when I started drawing this... now that I am sober and finishing it up I just want to go to bed, blah, blah, blah!

This drawing was inspired by one of my racist coworkers who always had a racist comment about Obama and constantly repeated negative talking points about him... For the record I think it's great to say, "fuck you" to authority & I thought some of the love for Obama was nauseating, but this coworker had the nerve to act disgusted about the way people talked about Trump & even gave me a lecture about why you should respect the president no matter what. Maybe it was a case of short term memory loss... less than a year ago this hypocrite was talking all sorts of mad shit about Obama, which is fine... I guess now that a racist is president they have respect for the position, gross!

What a sick fucking world we live in where people openly admit to loving cops and the president. The only thing I used to respect about Republicans was their fuck the government attitude, now if the government had a penis they would suck it.
at October 14, 2017