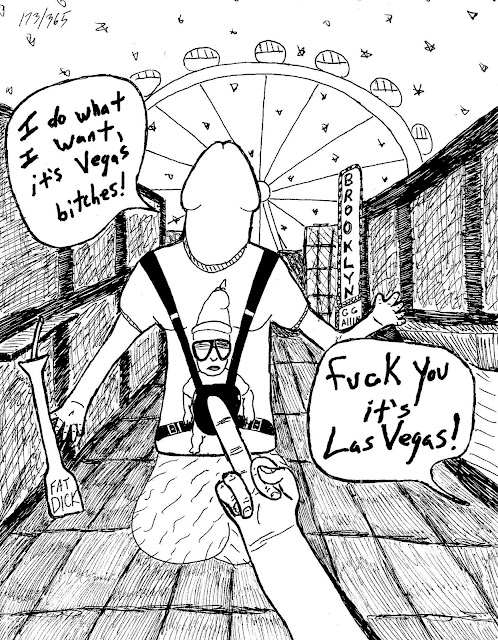 I think it's awesome that people come to Las Vegas and have a good time, it means a lot to me that a big part of my job is making sure people have fun, but one down side to tourism (and I am sure this goes for every where) is the dick head that comes to Las Vegas to shit on our city. They usually judge our city based on their shitty behavior, they come here to fuck prostitutes, they drink like armatures and treat employees like garbage,  & they refer to Las Vegas as, "Vegas!" ...blah, blah, blah! For the rest of the folks that come here and are cool, I look forward to seeing you tonight in the casino!

Also dressing up like the guy from the Hangover is a sure sign you are unimaginative prick, sure it was funny the first time I saw someone dressed this way, but at this point in time I have seen at least five zillion people in this get up, same goes for lame Elvis and Hunter S Thompson... speaking of Hunter S. Thompson I like the idea of his breakfast ritual but minus the half a pound of meat, the quart of milk, the keylime pie & of course being naked, I don't like to be naked, but I can get behind the 4 Bloody Marys, the good music, being outside, 3 newspapers, & 6 lines of coke for desert... 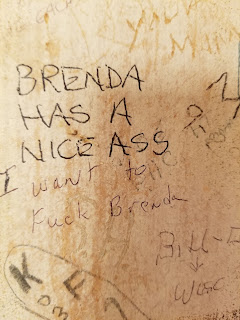 "Brenda has a nice ass" which someone else reply's, "I want to fuck Brenda" I find it interesting that based on bathroom graffiti testimony that someone would want to have sex with someone they have yet to meet, what if the original Brenda commenter has a different idea of what a "nice ass" is?  Why am I trying to rationalize bathroom graffiti? Anyway I spotted this in a bathroom in Nipton, CA and found it funny!
at October 16, 2017