These arms were meant for hugging, not war!

I thought I would post a link to the Donna Brazilian Wax story since no one seems to give a fuck... I was impressed how silent the media was about it, as for Democrats they seemed to be quiet or dismiss it like it doesn't matter... look fellow "liberals", "progressives", "Bernarchists", and "Democrats", this tribalism and being on teams bullshit is what allows these fuckers to pull one (or several of them) over us. It's OK to be wrong, I know it sucks to admit it, but if we can't admit to ourselves that the DNC and politicians like the Clintons don't give two fucks about bettering our country / planet for the majority of us, how dare we point the finger at Republicans for having their heads straight up their ass? I can admit I voted for Obama, I can say he is was a disappointment, & I can still say, "fuck Trump!" and all the bullshit that comes with his administration.

I am not very good at expressing my political beliefs in his fashion, I prefer to donate money, go to a protest, support ethical companies (boycott others), be a vegetarian, & even going out to the desert and picking up trash. So it sucks to have to write shit like this, but seeing the people that suppose to "care"and be "informed" choose denial & misinformation over the truth is frightening... I am just a dumb drunk that draws cocks & I can see through the alcoholic haze, so what's the issue? Get with it or continue to look like a corporate Democrat ass-licker like Bill Maher, oh well! I have to go to work! 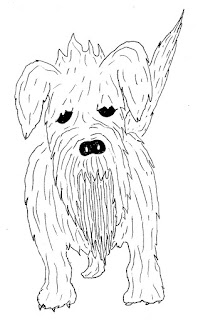 I love drawing Austin, he is a three legged West Highland Terrier mix. I don't know why no one adopted him before us because he is one of the most loving dogs I have ever met & everyone he meets quickly falls in love with him. We lucked out with him & hopefully he thinks he lucked out with us... anyway enough of the love bullshit, whenever I have the urge to draw but can't think of anything I usually resort to drawing Austin. I don't know why this is important but I guess if we are doing a 365 art project I should share some of my drawing thought process...
at November 06, 2017