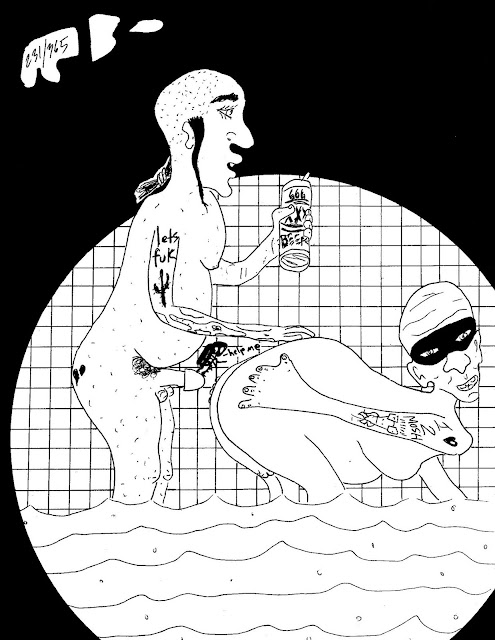 Recently I was informed that one of my favorite Thai restaurants Komol was closed due to a bug infestation, bummer I love their lunch specials and the wide variety of vegetarian options!

While I sat back and drank beer over the devastating news I thought about all of the other businesses at Commercial Center that could be affected by the bug infestation, The Green Door (swingers club), Hawks Gym (which is an all male "gym"), the Entourage Vegas Spa and Health Club (bath house), Badlands Saloon (Gay Cowboy bar, I love this place!), Las Vegas Lounge (TG/TS friendly bar*) Spotlight Lounge (every time I have been here I have met super cool people) & all sorts of other shit.

My religious coworker Phil thinks Commercial Center should be carpet bombed, while I like the fact that everybody has a place to get away from the daily bullshit and be around like minded people....  As I explained it to Phil, "isn't it nice to know that if you have an itch there is someone around to scratch it" He explained to me that this kind of lifestyle is the gateway to murder or some shit & told me about some coworker, you can read for yourself at the link I provided at my Fat Drunk Hairy blog.

My thoughts then turned to one of one of my friends that used to frequent the Apollo Spa (R.I.P.) @ the Commercial Center, he told me about something called Lights Out Tuesday, for those not in the know Lights Out Tuesday is a weekly event where the lights are turned off & in my friends own words, "as one cock leaves your mouth another one enters & same goes for your asshole" I wondered if it was possible for a cockroach to hop on an unsuspected penis then shoved into a welcoming butt hole, the inspiration for this drawing was born!

*I  assume my former boss shared this story with me because he knows I am an open minded person... a few years back I was working at my former place of employment and my boss at the time told me he met a hot chick at the Las Vegas Lounge, my interest was peaked because I knew about the T-girls that hung out there, and I knew all about my former boss being a total sexist homophobic prick... he went on to tell me that the woman he met had big tits and that he took her home and fucked her, then he asked me, "do you think it's gay to fuck a hot chick with big tits and a dick?" My opinion on this is if the person identifies as a woman, then you are having sex with a woman. To be honest with you that is thinking way to into it, if you are into to it and the other person is into it then have at it! As for the way the question was posed, if you have to ask then it is gay, but it's not like being gay is a bad thing... blah, blah, blah! So instead of saying, "it's gay!" I told my former boss, "it's not gay!" My former boss informed me, "this is exactly why I told you and no one else, if you tell anyone I will fire your ass!"