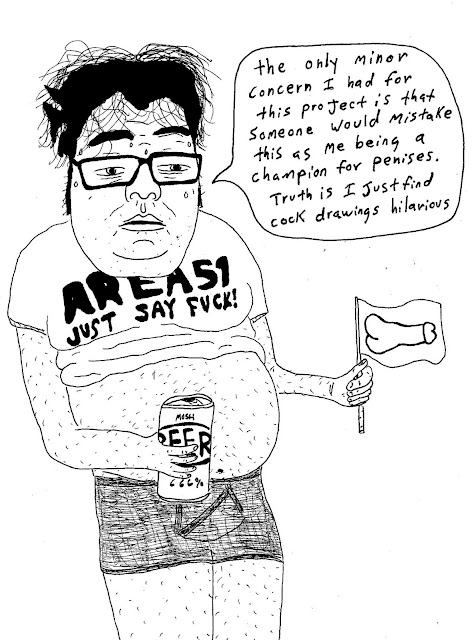 the only minor concern I had for this project is that someone would mistake this as me being a champion for penises. Truth is I just find cock drawings hilarious... everyone knows that well meaning PC person that makes everything you agree with look bad because they are alarmed by everything... granted I probably make everything I believe in look bad because I usually make my proclamations when I have had a half pint of Jamenson & 10 tall boys of PBR, so we can forgive them... on the flipside I would hate for some pro-Man and/or a-penis-is-better person to think this is some battle cry, fuck them!

To sum shit up way too simply I think life is better when everyone is treated better, fuck a master race, superior gender, or whatever you got. Granted, if someone is an asshole put them on blast... I know that now is the time for the incensed male, these fucks act like they have been held in bondage for the past 400 years... I know, I know you are too much of a passive aggressive coward to fess up so we have to live with, "I was just joking", fuck you I hope your dick gets knocked into the dirt!

Anyway, yesterday I drew a Poison Idea parody while blasting the Turned Out A Punk podcast and wouldn't you know it, I woke up this morning to find an interview with Jerry A on there. Quite often when I am drawing this I bump Turned Out A Punk, which elevates the fun! I have ordered several records just from Damian Abraham's recommendation, most recently Shower-Of-Smegma... if you like punk, records, wrestling...etc check it out!

Typing this is growing old... but as I wind down this project I just want you to enjoy dick art, don't show your dick to someone else, & don't be a dick...