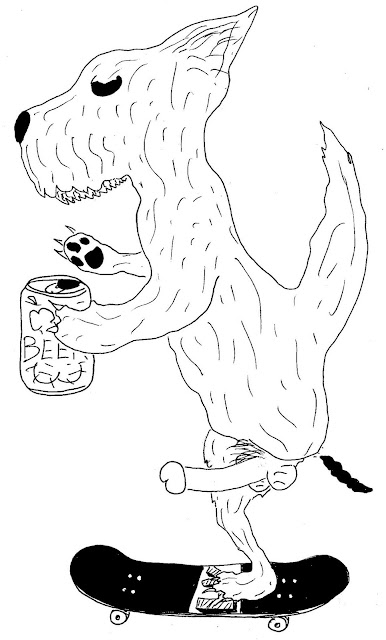 Penis, skateboarding, and beer is a recurring theme on 365 Days of Cock.com, but it is one of my favorite themes, this time including one of my best friends Austin
at January 31, 2019 No comments: 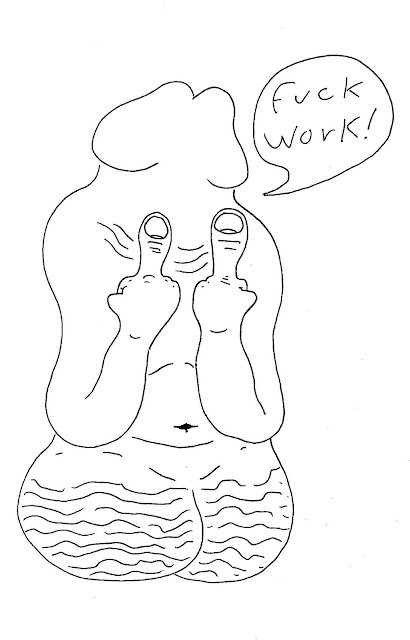 I guess it is technically tomorrow now which is today, so last night Bethany & I went to Kim from Aces and Ales memorial bash at ACES & ALES, the reason for the event was sad, but like Kim it was a lot of fun, it is sad that it takes a passing to bring us all together... I got to catch up with friends, I got to eat yummy food, & I got to drink a bunch of  amazing craft beers... I always looked forward to talking to Kim & it makes me sad that I won't be able to do that ever again. I dunno how to put it to words but it is a bummer I will never get to ham it up with her ever again...

Bethany & I's Nevada site has another post, maybe I should say just Bethany's since I haven't posted anything yet, check it out Desert Scum Bags 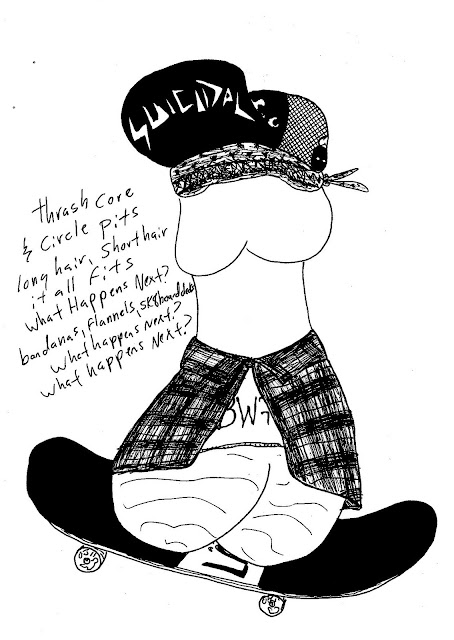 The Bandanna Thrash Revival Revival has begun... word up! 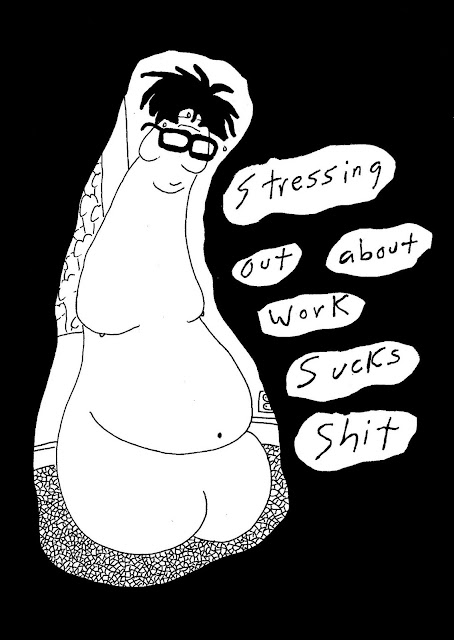 I know it goes without saying, but stressing out about work sucks shit! Lately there has been so many changes at work, and if I am not mistaken the writing is on the wall, I have no doubt that these mother fuckers are gonna lay us off sometime this year... I hate looking for a job, I am not good at learning, my chosen industries days are numbered... how am I gonna pay my bills? who wants to hire a fat old fuck? why am I complaining others have it worse? blah, blah, blah, very stressful, oh well! I am sure my lifestyle will put me out of my misery sooner than later!
at January 26, 2019 No comments: 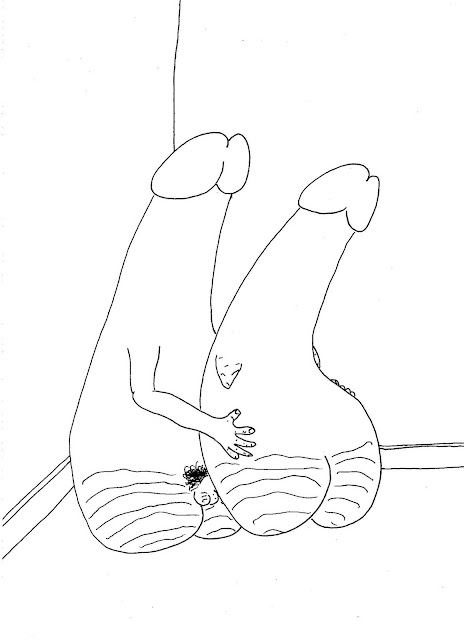 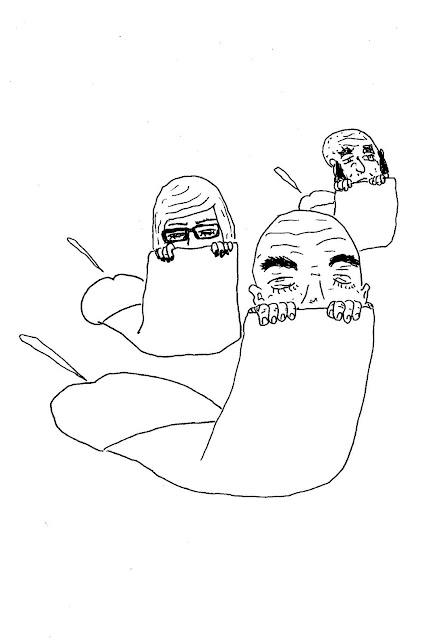 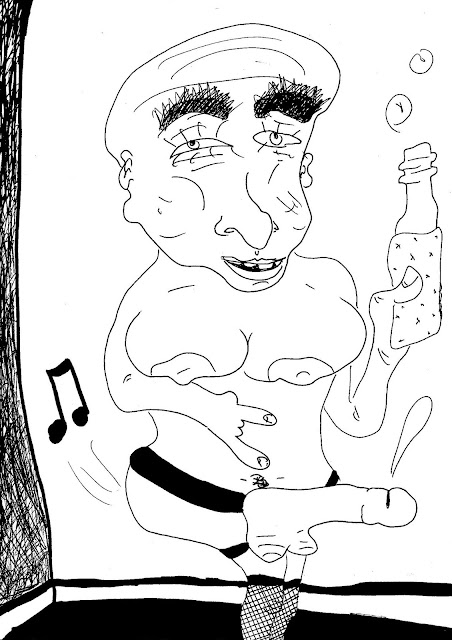 this might come as a suprose to you but I was super shit faced when I drew this lovely thing...
at January 24, 2019 No comments: 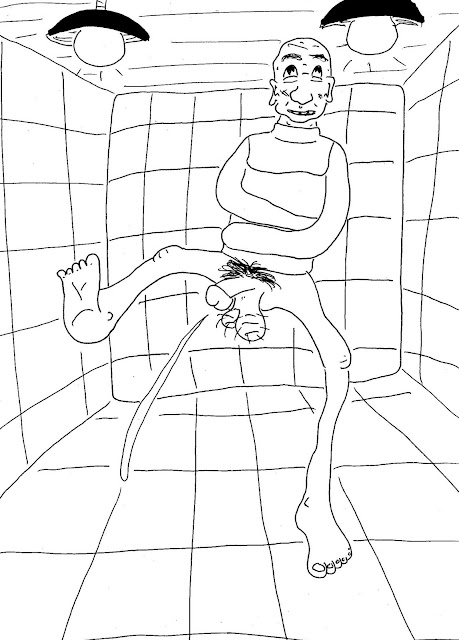 a quickie drawing whipped up while I was trying to solve a case on the First 48
at January 23, 2019 No comments: 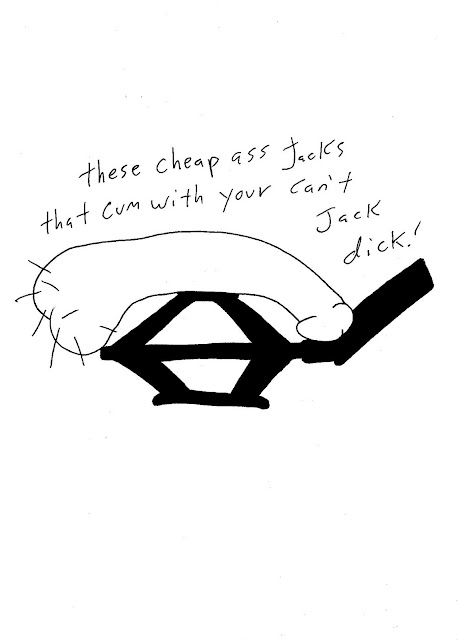 Those cheap ass jacks they supply in your Chevy with every purchase can't lift dick or shit... The other day I dealt with a major pain in the ass. I was driving home from work in the rain, when I hit a pot hole and got a flat tire. "No problem" I thought, "I will just swap tires in the rain. Well, it turns out my spare was flat. I assume the mother fucker that stole my car got a flat while driving my car, put on the spare, & proceeded to get a flat on the spare... MOTHER FUCKER! It was nice of him to buy a new tire for my car. Fuck you Allstate Insurance for not doing a full inspection of my car, I know if I raised the issue they will blame me for signing off on my car, but I am a drunk artist, I don't know what to look for... So, I went to Discount Tires & tried to get my flat repaired, turns out the fucker that stole my car fucked up the spare so much it was not replaceable. So I bought a new tire for my car, not a spare, but an actual tire and rim, MOTHER FUCKER! now my spare is a real tire, I guess that is good! When I got home with my spare I attempted to swap tires but my Chevrolet jack twisted under the weight of my car & my car was now resting on the ground without a tire on it, how the fuck do you even get a jack under that thing?

I called AAA, and when the driver arrived he pointed at the jack that was stuck under the car and asked, "your car is not a toy, why would you try to jack up your car with a toy?" I told him, "the jack came with the car", he told me once again, "it's a toy!" The AAA tow driver was super nice & got my spare on & I drove to Discount Tires and spent 400 bucks that I didn't have on a pair of tires...

Through all of this shitty situation the employees at Discount Tires were amazing, my family has been shopping at the same location on Nellis for close to 30 years, I would never endorse a corporation or chain, but these folks have always been nothing but nice to me at the most stressful times ever, not just this location but also the folks at the Maryland Parkway location as well.

The funny thing about this is that day of my flat tire was also the day I received my first restitution check from James T Jackson, James claims he didn't steel my car but he was just driving it... FUCK YOU! If that is the case I have more respect for the person that stole my car, you are a chicken shit that lets others do the deed... I am glad James went down for this... if you know better than to steel then you should know enough to return shit, James could have been the hero and returned my car to me, but no he decided to be a parasite and suck the benefit from what another piece of shit did or so this coward claims, fuck you James T Jackson!

When people talk shit talk shit about East Side Las Vegas / Sunrise Manor it is because people like James T Jackson, this was never the fancy side of town, but it was a good spot for a working class family to live, but lately pieces of shit like James are the norm, & have been ruining shit! Fuck him!

Fuck, I am drunk but I needed to get that off my chest... 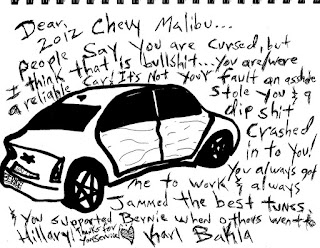 I shit you not, the day after I got my car back some dumb ass crashed into it... MOTHER FUCKER! As seen in the drawing above!
at January 21, 2019 No comments: 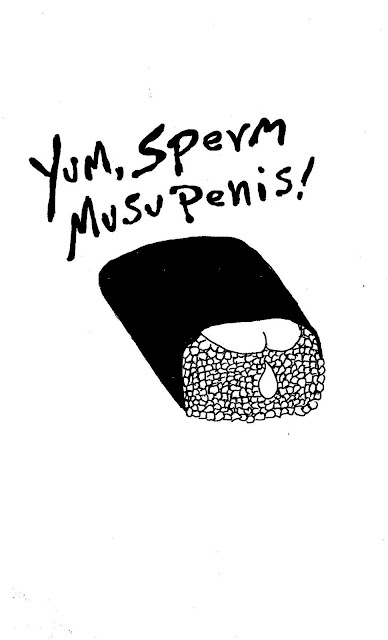 Yum, sperm muspenis!
One of my favorite things about living in Hawaii was all the amazing foods like Spam Musubi
at January 17, 2019 No comments: 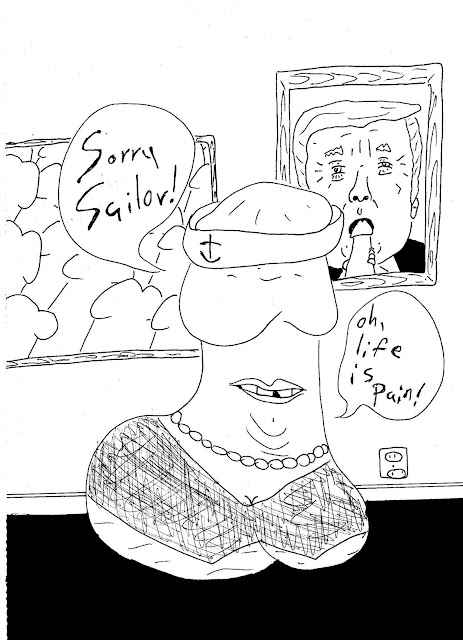 at the Bakla Gallery of Fine Art

I know that a lot of people count on my dick art to get out of bed and to those I apologize for slacking, hopefully this will tie you over
at January 16, 2019 No comments: 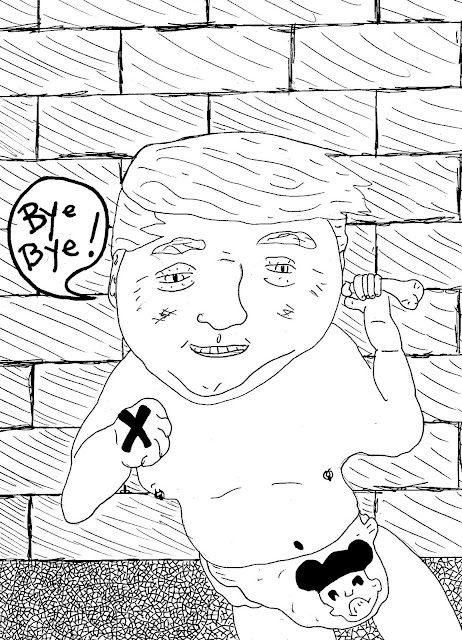 As a leftist I shouldn't be a fan of this, but I thought it was hilarious that Trump walked out of his meeting with Chuck and Nancy by saying, "Bye Bye" ...for the record when I talk about my dislike for politicians like Trump, you can add Chuck and Nancy to that...
at January 11, 2019 No comments: 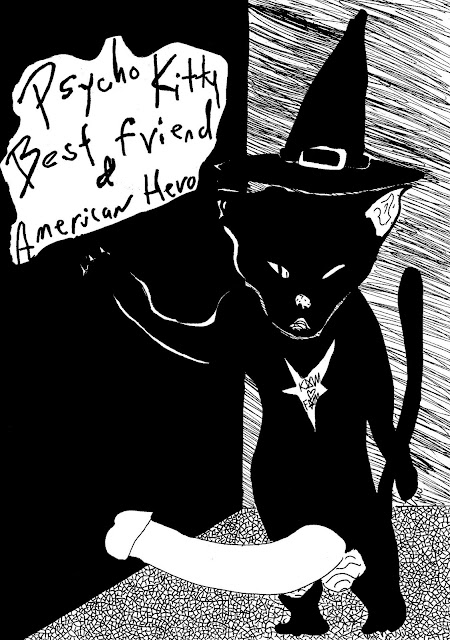 Took my longest break from 365 Days of Cock because there isn't enough time in the day... I have started to play my guitar again, trying to exercise more, trying to have more sober days than drunk ones... it wasn't a new years resolution, it is just that my cloths are starting to feel tight & I would like to put off having a heart attack or some shit... Anyway here is my tribute to my fallen brother Psycho Kitty, Psycho was a brawler, he lost an ear & he lost an eye, all in pursuit of ultra violence. When I first adopted Psycho Kitty he didn't seem to like me very much but over the years he learned to love me & I loved him... I miss you Psycho Kitty!

I got the new Damned LP Evil Spirits, so far I am enjoying it... it is a nice mixture of their punk and Gothic eras, maybe not... I guess I never really listened to their later albums, sure I have a few of them & have jammed them a few times over the years, but I will always be a sucker for that first Damned LP, I remember when I first heard it and remembering how blown away I was by it... when bands talk about how close minded their punk fans are they are talking about me, but they would be wrong, it's not that I am not open minded I just think that Black Flag did not know what I needed, I still stand by the fact that for the most part everything after Damaged sucked, it sucked so much that the steaming turd What The.. didn't seemed so bad in comparison... I know it has been stated a zillion times but that cover art for What The... is worse than my shitty art work.
at January 10, 2019 No comments: 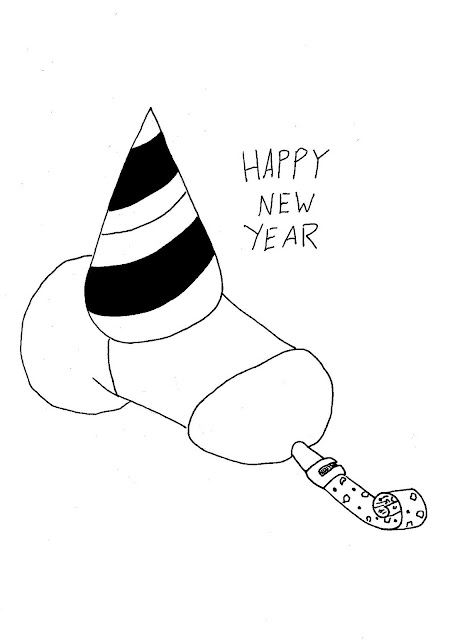